The UNESCO decided: the Upper Germanic-Rhaetian Limes is a World Heritage site. An important component: the Limes Museum, was extended in 2005 and reorganized in 2019. 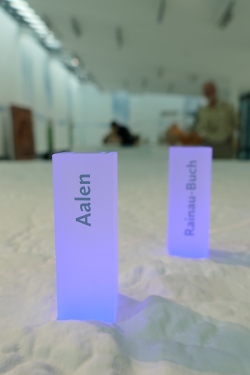 An important component on the Limes: The Limes museum in Aalen. (© Limesmuseum)

The, with great anticipation awaited decision of the UNESCO World Heritage Committee was made in Durban, South Africa in July 2005. The Limes is thus, together with Hadrian’s Wall in England part of a „Transnationalen Welterbes“ (Transnational World Heritage) with the name „Grenzen des Römischen Reichs“ (Borders of The Roman Empire).

„The enhancement of the Limes to UNESCO World Heritage status is for the Deutsche Limesstraße (German Limes Route) and Aalen simultaneously an opportunity and a challenge. Visitor interest will increase strongly and so the Roman finds, which the German Limes Route and Aalen can offer will move into the focus of the public eye. Aalen and the German Limes Route is well prepared”, says Lord Mayor Ulrich Pfeifle, chairman of the Deutschen Limesstraße and a member of the Deutschen Limeskommission (German Limes Commission), in view of the World History site designation. „Last but not least, in view of the UNESCO decision, we have extended the Limes museum with a cost of 1.5 million Euro.“

Aalen, with the once biggest cavalry fort north of the Alps and the Limes Museum is centrally located along the Limes. The Limes Museum, a branch of the Archaeological State Museum and the biggest Roman museum in Germany, offers an excellent and extensive exhibition of military and civilian life on the Limes. Many special events, such as, lectures, exhibits and the Römertage (Roman Days) which take place every two years, are an excellent supplement to the museum’s pedagogic programme.

The Upper Germanic-Rhaetian Limes stretches along over 550 kilometres from the Rhine via the Lahn, the Main to the Danube. Besides original Roman relics, reconstructions, excavations and replicas can also be seen.

Roman history runs through the town like a golden thread.

Aalen shows a strong empathy with the Roman past through its thermal baths “Die Limes Thermen” where you can immerse yourself as the Romans did - and just relax in an antique Roman atmosphere.

The tourist information office offers a lively, all-inclusive stay for groups with the title „Achtung, die Römer kommen“ (Beware, the Romans are coming). A special programme at the Limes
Museum, a bus trip to the Roman find spots in the region and a Roman meal with a mulsum tasting (wine with honey) makes this trip an unforgettable experience. Individual travellers can spend a weekend the Roman way – switch off, unwind and enjoy.